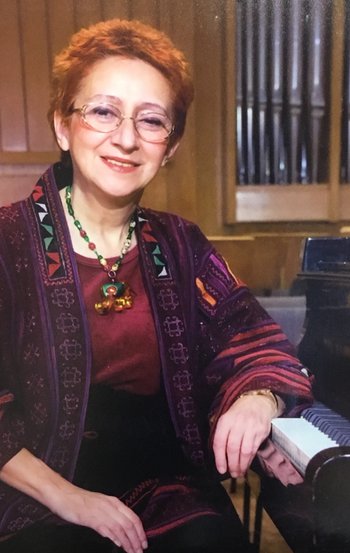 ​Julia Tsenova (1948-2010) is a composer and pianist with a bright creative presence imposed in the seventies, when she graduated piano with prof. B. Starshenov and composition with prof. P. Vladigerov, at the State Academy of Music in Sofia. Her consequent interests in contemporary music led her to participate in various composers' forums, ateliers, concerts and festivals in the four continents of America, Europe, Asia and Australia. Her numerous creative works are marked by an original, multi-layered philosophical conception which interweaves intellectualism with paganism and a broad religious sentiment with an undeniable individuality. The originality of the ideas lead her to seek out the roots of various cultures, while her artistic sense and subtle feeling for sound form the basis for strange and non-standard musical decisions.

Julia Tsenova's compositions are primarily symphonic or for chamber ensembles, though choir, scenic and jazz music complement her profile as a composer of versatile genre. Her specific musical style is immediately recognizable by its outstanding unexpectedness and its contemporary means of expression, reaching the limits of difficulty in its non-standard use of the instruments. Her works, without being programmatic, follow their own dramaturgic developments and exhibit a flexibility of ideas. She builds up the form from large, cleverly polished lines. The specific modalities used have their own intuitive and logical foundations. Her style carries elements both of emotionality and of rationalism, an integral component of it being the artistic expressivity and freedom. Her works are difficult to perform, requiring a complete understanding and penetration into what is happening.

Julia Tsenova is mentioned in various authoritative encyclopaedias and has received prizes for choir and scenic music. In 2001 a book called "Diving in the Poles" was written by prof. dr. Veska Tsinandova-Haralampieva, and Bulgarian National Television (BNT) produced a documentary entitled "prayers onto the wall" devoted to the composer and her works.

Prof. Julia Tsenova was the dean of the Pop and Jazz Department in National Academy of Music in Sofia "Prof. P. Vladigerov", as well as a member of the governing council of the Union of Bulgarian Composers.